Jesus wept; Voltaire smiled. From that divine tear and from that human smile is derived the grace of present civilization. -Victor Hugo

Fr. Vazken Movsesian is a priest of the Armenian Church. For the past four decades he has melded the most ancient traditions and practices of Armenian Orthodoxy with contemporary themes to bring about the promise of peace. He is the child of Genocide survivors and understands the importance of transformation to facilitate the healing 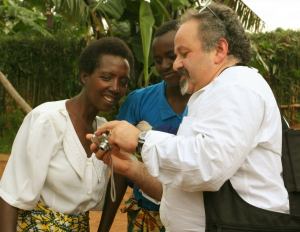 Born and raised in Los Angeles, he is a graduate of the University of Southern California, in psychology and social ethics.  He has studied at the Monastery of Holy Etchmiadzin and was ordained a in 1982 at the St. James Armenian Church in Los Angeles by Archbishop Vatché Hovsepian.

His work has taken him to Rwanda and Armenia to study the processes of survival via the implementation of the very basic human precepts of faith, hope and love.

Fr. Vazken is an innovator. His first parish was in the dawning Silicon Valley (1982-1996). There he pastored and established the St. Andrew Armenian Church in Cupertino, California, next to the blossoming Apple Computer campus. Fr. Vazken established the first electronic bulletin board system (BBS) SAIN (1988) dedicated to the free flow of information about Armenians, the Armenian Church, Orthodoxy and Genocide studies. Since that time he has pioneered the use of modern technology to bring the message of hope and love to the world, via videos and electronic sermons. For over 30 years he has produced a steady stream of lessons, open forums and electronic classroom sessions designed to promote social change via patterns of love and non-violence.

In 2003 Fr. Vazken established the In His Shoes organization as a response to Genocide. He teaches that those who have suffered evil have a unique responsibility to take action against injustice to others. Based on Christ’s principles of love, compassion and repaying evil with good In His Shoes challenges people to find the terms which define us as a human race. This is a language of understanding and compassion, a language he is developing into what he has coined as Armodoxy.

From 2003 to 2016 he was the parish priest at the St. Peter Armenian Church & Youth Ministries’ Center in Glendale, California, where he worked with immigrant families from war-torn countries, adjusting to the difficulties of resettlement. It was there that along with Suzie Shatarevyan he began broadcasting weekly videos and podcasts with a message of hope to a world-wide audience on the Epostle.net site. The flagship “Next Step with Fr. Vazken” is currently heard and followed on six continents, eliciting a growing response for social responsibility by practicing love, compassion, forgiveness and working for peace. His videos – Armenian Christianity Today, In Step with Christ, AC101 and AC202 were produced by the Western Diocese of the Armenian Church and provide a clear description of the Christian Church acting in modern times. All of these series are available on the Armodoxy channel on Youtube.

Fr. Vazken continues to serve out his ministry as a priest of the Armenian Church in the Western Diocese.

More? A personal statement, where Fr. Vazken shares his vision for his ministry and faith in a blog.

Up-close and personal: Here’s an interview with Fr. Vazken from January 2022, published in Armenian America magazine:

Fr. Vazken is married to Susan (née Boranian). With a solid background in the Armenian Church since childhood, she is the other half of the ministry. She is a graduate of California State University, San Jose with a degree in Nutritional Sciences. Their life through Cupertino, Pasadena and Glendale allowed many opportunities for Christian outreach in each of the communities and together they forged the In His Shoes ministry, as an outreach for the Armenian Church.

They have visited college campuses to charge young people with the simple message of walking in the shoes of others. They have also been in remote locations to make the In His Shoes philosophy – walking in the shoes of others – come alive. Standing with the native Americans at Standing Rock, North Dakota to the ruins of a US Airforce shoot-down in Sasnashen, to the Golden Gate bridge to bring notice to the genocide in Darfur, they have lived the In His Shoes message.

Their three sons serve as deacons in the Church. Along with their wives they are part and followers of the Armenian Church.

Photo: In the region of Van, Western Armenia, with the sun setting over Lake Van.

When I was young and they packed me off to schoolAnd taught me how not to play the gameI didn’t mind if they groomed me for successOr if they said that I was just a foolSo I left there in the morningWith their God tucked underneath my armTheir half-assed smiles and the book of rules
And I asked this God a questionAnd by way of firm replyHe said “I’m not the kind you have to wind up on Sundays”So to my old headmaster and to anyone who caresBefore I’m through I’d like to say my prayersI don’t believe youYou had the whole damn thing all wrongHe’s not the kind you have to wind up on Sundays
Well, you can excommunicate me on my way to Sunday schoolAnd have all the bishops harmonize these lines…
– Ian Anderson, 1971 “Wind Up”
480

Months serving the community and counting