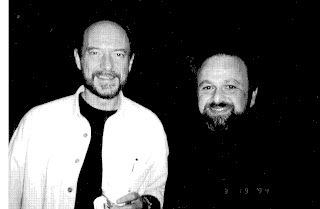 Whenever I get to feel this way, try to find new words to say, I think about the bad old days we used to know. Nights of winter turn me cold — fears of dying, getting old. We ran the race and the race was won by running slowly. Could be soon we’ll cease to sound, slowly upstairs, faster down. Then to revisit stony grounds, we used to know. Remembering mornings, shillings spent, made no sense to leave the bed. The bad old days they came and went giving way to fruitful years. Saving up the birds in hand while in the bush the others land. Take what we can before the man says it’s time to go. Each to his own way I’ll go mine. Best of luck with what you find. But for your own sake remember times we used to know.
-Ian Anderson
(Jethro Tull 1969)
Another day of reflection. Twenty nine years to the day Fr. Vazken was born. Days are lost, one in another. Filling up moments with mission and ministry.  Each September 26 is a convenient opportunity for reflection, accounting and rededication. A few years ago, I remember I wrote the manifesto for the “Next Step” and it pushed me to take the next step in this ministry God has graced me with.
On the eve of ordination, by spiritual father, Abp. Vatché asked me, to vow to never to substitute the worldly work with that of spreading the Gospel of Christ. I took a vow to never tire and by the Grace of God, I’ve been given this awesome ministry that has had challenges, but keeps me ever vigilant in the work of spreading a message of love, hope and peace.
The years go by, the message is the same and the audience changes.
Well do you ever get the feeling that the stories too damn real and in the present tense? Or that everybody’s on the stage and you’re the only person, sitting in the audience?
And so the challenge – to stay relevant. The beauty of Christ’s message is that it is always relevant, because it is pure. It is based on love and peace. The foundation of the message IS love and peace. And the message produces love and peace.
I’m listening to Jethro Tull as I write these notes. Tull music has been my inspiration. They are playing a version of “God Rest Ye Merry Gentlemen” at the moment. It is SO relevant. The beat is picked up and it flows. An ancient melody making me swing right now, pushing the keyboard strokes in rhythm.
So to my old headmaster and to anyone who cares, before I’m through I’d like to say my prayers. I don’t believe you. You have the whole damn thing all wrong. He’s not the kind of god you wind up on Sundays.
The Church was in my veins from early days. I was brought up in the Church. I’ve been told that my first words were spoken in the church: pointing to a light, I exclaimed “Looys” and so I can even claim mythical roots to this growth.

My growth through orthodoxy has been nurtured by many factors, perhaps non greater than the music that has filled my ears from childhood – church music, ethnic Armenian music, the beat on the streets and the incredibly large collection of music by Jethro Tull. In fact, I can safely say that the music of Jethro Tull pushed me to the priesthood. It has been a constant tune that has been playing in the background as I grew and developed. It has kept beat with me and by the Grace of God, it has been a constant in my life for the last 40+ years, consistently inspiring me, with genius lyrics coupled with complex tunes and a nasally voice that mimics the best of the Armenian deacons of the old world. (Only last year I found a group that had made the connection with me – Bambir and their album, “Armenian Scotch” connecting the dots between the Caucasus mountains of Armenia and the Highlands of the United Kingdom.)

All Things Blessed and Blessings
Scroll to top