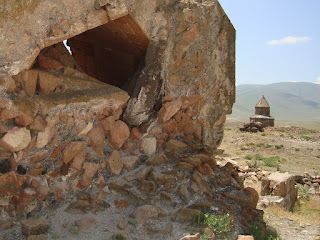 The fallen City of Ani is referred to as the City of a thousand-and-one churches. As one of the centers of the Armenian national life, structurally the city was one of the marvels of Christian civilization and a tribute to Armenian Orthodoxy. During the Summer of 2014 I led a pilgrimage to the city. Image a large city wiped out. What’s left? A few ruins, a few walls, and remnants of a civilization that once was.

The City of Ani (or what was the City of Ani) is today in the Eastern part of Turkey. When we reached the main wall of Ani, there were three signs written in Turkish, English and I can’t remember the language of the third. They described the city in its heyday. It is an attempt at history.
Nowhere throughout the city, where we found small signs propped up next to broken and crumbled monuments, was the word “Armenian” mentioned. No mention of a past. No mention of the pious people, kings, priests who were responsible for the thousand-and-one…. for the life that surrounded those monuments of faith and hope. So I guess, we should deduce that the Turks, who are Muslim, out of some unknown motive, decided to erect Armenian churches throughout the area of an entire city and adore each church with Christian iconography?? Wow! Maybe a goodwill gesture before they slaughtered the people?

No mention of “Armenians” except on one sign. It was on the sign that pointed to this fallen mosque (pictured). There, and only there, we found the word “Armenian” in reference to the City and monuments of Ani. There, is it mentioned that this mosque had been toppled down by an “Armenian terrorist monk.”
Yes, Walter Benjamin is right: History is written by the victor. But a bit of imagination please… an “Armenian terrorist monk?” At least it’s so far out there – even beyond the “goodwill motive theory” – that a counter claim is unnecessary.
https://epostle.net/wp-content/uploads/2015/11/Fallen-at-Ani.jpg 240 320 Vazken Movsesian https://epostle.net/wp-content/uploads/2022/07/final_logo_large_for_epostle_web-300x189.png Vazken Movsesian2015-11-20 00:25:002022-09-21 01:19:27Fallen at Ani
0 replies

The Problem of Thanksgiving

Pilgrims before Thanksgiving
Scroll to top