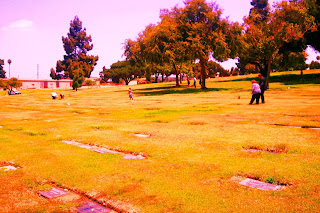 Out of the mouths of babes….
“Is she still in the box?”
The question hit me unexpectedly, though I should have known it was coming. Four year-old Harper was sorting out some of the pieces from the life-to-death puzzle in front of her. We were at her great-grandmother’s funeral, and this piece of the puzzle wasn’t an easy fit. After all, just an hour earlier she had seen her great-grandmother’s body lying in the coffin at the church and now we had arrived at the gravesite and there was the same coffin, closed shut and waiting to be lowered into the ground. It called for an answer: “Is she still in the box?”
Of course, when you answer a question like this you want to be honest, but at the same time you realize that there’s a good chance that honesty can and may horrify a small child with thoughts of people being trapped in boxes and ultimately covered with earth.  It’s a horrifying thought for anyone, child or not.
Earlier, at the church, I heard a very simple and eloquent conversation between Harper and her mother. The young voice proclaimed that great-grandma was “In Heaven, with Jesus.” I didn’t need to look any further for an answer, especially for an answer that was truthful and honest.
“Is she still in the box?”
“No. You tell me, where is she?”
“In Heaven with Jesus,” pronounced this child.
“That’s right. And if she’s in heaven with Jesus, then she is not in the box.”
It doesn’t get any simpler than this! 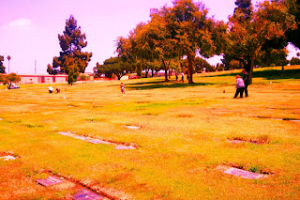 Several years ago, when my father passed away, my mother asked that the casket remain open in the church. My sisters and I were against the procedure for the simple reason that our dad had died unexpectedly at the age of 58. We wanted to remember him the way he was – the way we remembered him in life. But mom was in charge, and we respected her wish. The casket remained open in the sanctuary for a last look. When I entered the church that evening and saw my dad’s breathless body, I was hit with a revelation. I had officiated at so many funerals through the years and had stood before open caskets several times, but the reality of what I witnessed didn’t hit me until that evening. My dad wasn’t there! There was a body, but it wasn’t him. Dad was filled with life, this body had no life. Dad’s fingers danced on the fingerboard of his violin, these fingers were still. His smile, revealing a chipped tooth, was infectious and begged for us to join in the celebration of life. That spirit of celebration wasn’t here. No, this wasn’t him. This was the body which once held my dad. Dad was life and that life cannot end. He lives on, but not here.

And so, at the gravesite, with the casket waiting to be lowered, I answered Harper truthfully: No, she’s not in the box. In fact, it would have been a lie to tell her otherwise, that her lovely great-grandmother – the one she cared for, the one she laughed and played with – was in the box. No, not in the box. She lives on, but not here.
“Out of the mouths of babes,” Jesus tells us, comes praise. In this case, praise was found in such a profound statement, that it fit and filled the requirements of logic. A little child, the memory of her great-grandmother and the truth of eternity all came together. She’s not in the box, she’s in Heaven.
Matthew 21:16
https://epostle.net/wp-content/uploads/2021/08/Inglewood-2Bgrave.jpg 213 320 Vazken Movsesian https://epostle.net/wp-content/uploads/2022/07/final_logo_large_for_epostle_web-300x189.png Vazken Movsesian2021-08-10 23:23:002022-09-02 17:47:00Is She in the Box?
0 replies