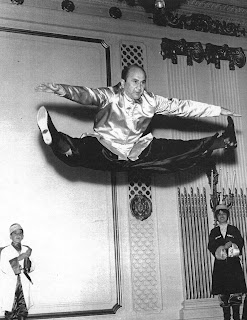 Joseph and Mary had a baby. He was my father. He was born on July 17, 1932 to Joseph and Mary Movsesian, in Marseille, France. This jesus was named Jeane.
Both Joseph and Mary had loved before. They were both widowed during the Armenian Genocide. Aside from their spouses, they lost parents, siblings and children. They were exiled from their homes in Kharpert and Sivri-hisar and somehow, by the Grace of God they ended up in France in 1931 where they married and tried to bring some semblance of order to the chaos they had witnessed. In that chaos, a new light, a new miracle and a new hope, Jeane, became their salvation.
After Jeane’s birth, Joseph journey across the pond to America. He set up life for his new family amidst the Great Depression, bussing tables and stocking vending machines at a New York cafeteria. Mary and Jeane met up with Joseph in 1937. At the Macy’s Thanksgiving Parade that year, Jeane sat atop his father’s shoulders, much like Jesus might have sat atop his Joseph’s shoulders in the carpentry shop, having a bird’s-eye view of all the creativity around him, allowing his little head to wonder – and formulate the metaphors – about the magic of life.

In 1943, with America fully engaged in World War II, the family moved to Los Angeles. It was here that Jeane would grow up. Kids being kids, made fun of his name: Jeane is a girl’sname! Mary adopted an Armenian for him: Varougan (pronounce Vahr-oo-zhan). I’m not sure how that change would have helped matters but it did. (Later in life, he would go simply by John.) Dad went to Virgil Junior High where he entered the orchestra. He taught himself the violin and by age 17 he was offered a position with the Los Angeles Philharmonic!

He graduated John Marshall High School in 1949 and continued his education at LA City College. He was a man of determination and had set his mind on being a medical professional. He was drafted and served as a Medic in the US Army during the Korean War. After the war, he married Anna and started a family together in the heart of the City of the Angeles.

Varougan went from LACC straight into USC Pharmacy School. They told him it could not be done, and that’s all he needed to hear to make it happen. He graduated in 1960 with a Pharm.D. degree. He was a miracle worker. He was a Pharmacist by trade and a physician at heart. He mended and healed, he hammered and nailed, he built and rebuilt. He could fly through the air and dazzle people with his charm. He was Joseph and Mary’s son.
Dad passed away in 1991. He resurrected a few days later. He’s alive to this day in our memories and the stories we marvel at and repeat among us.
Though I knew these facts, it wasn’t until I turned 60 that I realized that my dad came from divine stock.
—
When I was growing up, I was influenced by a variety of people from different walks of life, with an assortment of life-styles, each flashing their own values. One of these influential  men was Hratch. Though he claimed to be an atheist, he helped me become a priest. Hratch’s father was an Armenian writer, a prominent man and well-regarded within the community. Though I never read any of his articles, essays or books, I heard about Alex Kludjian and about the influence he had within the Armenian intellectual community. Because of him I learned there was an “intellectual” category of people. And in fact, thinking about it now, I would say that my conversations with his son Hratch fell into that intellectual category.
Hratch passed away a 2009. A few months after his funeral, I received a box in the mail sent to me by his wife. It contained a plaster bust of Mgrditch Khrimian Hayrig, a 19th century cleric of the Armenian Church. By this time I had served in the Armenian Church for over 25 years. I knew the players and also had developed a love for certain figures throughout the history of the Church. Mgrditch Khrimian Hayrig certainly tops that list. He was the chief bishop of the Armenian Church under Ottoman occupation. He led the people by preaching self-reliance and victory through inner strength of conscience and will. One of the first books I read in the Armenian language was Hayrig’s “Bab oo Tornig” – his instructions on living a meaningful life. In this essay, he calls for a connection – a permanent bond – to the Armenian soil. I cherish this book and to this day refer to it for inspiration.
Hratch’s wife wrapped the statuette along with a note. She wanted me to have this memory. It was Hratch’s and now mine. It was made of plaster, hard and shiny. I examined it and noticed two bits of writing on the back of it. One was in ink. It was from the Venerable Catholicos Vazken, with a dedication and dated 1960. That particular year was the first time a Catholicos of the Armenian Church had visited North America and so I figured he probably presented this bust to Alex. If there is such a category as intellectual, then certainly Hayrig’s statue belonged within that community.
But it was the second notation that was of interest to me. It was engraved in the plaster before the putty had dried. It was the signature of the artist who constructed the bust. Below his name there was a date: 17 July 1932.
This statuette is 84 years old today, the same age that the son of Joseph and Mary would have been this very day. The son of Joseph and Mary was a miracle worker. He came into the world amidst choas and taught us to believe and to have hope. He believed in self-reliance, not in a pompous and arrogant manner, nor with false pride. Rather he understood that the knowledge of God meant a knowledge of the self and with a healthy knowledge of the self, one could be in tune with God… that is, one could be a son of God. It’s a complex formula that he somehow lived in simple elegance. It’s a formula that is built on dreams and dreaming. Perhaps it cannot be explained by words, but it works.
https://epostle.net/wp-content/uploads/2016/07/babajan-in-jump.jpg 320 247 Vazken Movsesian https://epostle.net/wp-content/uploads/2022/07/final_logo_large_for_epostle_web-300x189.png Vazken Movsesian2016-07-18 06:30:002022-09-21 01:19:06Joseph & Mary’s Son
0 replies

A Few Hundred Years of Pokeman

Mess without Poetry
Scroll to top