Kiudkhatch – Discovery of the Holy Cross and St. Joseph

Considering that today is the feast of the Discovery of the Holy Cross, Kiudkhatch I wish to speak to you about adoption. Earlier during our service, we heard the reading from the Apostle Paul regarding the Cross being our salvation. In other words, this instrument of torture in the Roman Empire, was adopted by the Christians to be a means to salvation. We Christians adopted the Cross and made the symbol of destruction and suffering, into a symbol of victory! This is one type of adoption – taking an idea and making it your own.

Of course, there is another type of adoption, one which is more common. This week, in the shadow of the Holy Cross, the Armenian Church commemorated a saint whose name we all know, but at the same time, we know very little about him. He is St. Joseph, the husband of St. Mary the Asdvadzadzin. Our Armenian Apostolic Church remembered St. Joseph this year on October 18 and if you open the calendar of the Church you would be surprised to learn that the Church ascribes the same title to Joseph as it has to Mary, that is, he is referred to as Joseph Asdvadzahayr, that is, the Father-of-God. Now, in the case of St. Mary, we accept this title because she gave birth to Christ, but we have difficulty with the title given to Joseph because from our earliest days in church or in Sunday School, we have learned that there was no biological tie between Joseph and Jesus.

Very little is written about Joseph in Holy Scriptures, but from that little we know that he was a devout and God-fearing man. We know he his strength not only by his physical prowess as a carpenter, but by his moral character. He was unwilling to discredit his wife. Being obedient to the messenger of God, even when all the facts gave him reason to doubt, he took on the responsibility of being the adoptive father of Jesus. In that act of compassion, Joseph did not allow Jesus to be referred to as “illegitimate,” or as an “orphan.” Nor did he allow Jesus to be treated as anything less than his own son.

We know that Joseph was with Jesus for at least the first 30 years of our Lord’s life. In the Gospel of Luke we read that at the start of our Lord’s ministry, when he entered the Temple and read from scriptures, the people questioned his authority by saying, “Is this not the son of Joseph the carpenter?” From this statement, it’s obvious that Jesus was accepted and regarded Joseph’s true son.

The act of adoption is an act of love and sacrifice. As parents, we love our own children, but to love another person’s child as your own reflects a very deep love. Joseph adopted Mary’s child, loved and cared for him as his own.

When we talk about the saints, whether Joseph or any of the other saints, it is easy to get caught up in the details of their lives rather than understand that a saint is like us, with all their frailties, problems and even doubts. However, they are able to rise from their difficulties and aspire to the godly, hence, giving us the inspiration and motivation to move from our difficulties. It is important to see in them the characteristics from which we can learn and by which we can pattern our lives.

I know many of you have come to church today not to receive a history lesson, but to look for strength to go through your difficulties and your challenges – physical, spiritual or relationships. We have all come to church to understand how to live our lives fully.  In learning about Joseph we receive an example for living. We see true strength. We understand what it means to be obedient to God’s word. Joseph prayed, believing that “Thy Will be done” would take place when he, Joseph, agreed to take part in God’s will. In fact, his actions allowed God’s will to be done here on earth as it was in heaven.

As the adoptive father of Jesus, Joseph displayed courage and immense love for his wife and her child. Former president Barak Obama once said, “What makes you a man is not the ability to make a child, but the courage to raise one.” In fact, in this manner alone, we can understand why our Church Fathers referred to Joseph as the Father of God.  Joseph teaches us the true virtues of parenthood – it is the courage to give, sacrifice and to love another human being as your own. He raised Jesus Christ from infancy to adulthood and gave him the necessary support in preparation for the Divine ministry and to ultimately rise to the Cross and conquer it.

If you look at our story as an Armenian people you will find that our Church has taken on this role as the adoptive parent. We refer to the Church as our mother or as our parent because the Church never allowed us to be regarded as illegitimate or as an orphan. Despite our worst days, the loneliness we endured and the abandonment we felt, the Church was with us. Only, the Church, has been with us, not political parties, nor organizations, but the Body of Christ.

When we are baptized, the priest delivers us from the water with the words, “Purchased by the Blood of Christ, from servitude to sin, accepted as an adopted child of the Heavenly Father…”  That adoption is a statement of love.  It means we are true children, with never a worry of being abandoned or forgotten.

During the centuries under Ottoman rule, the Church stood by us. At the Genocide, with limited resources, the church aided us. At the Battle of Sardarabad, the bells of Etchmiadzin were heard as a victorious chant. During the 70 years of communist occupation (1920-70), when the atheist regime told us there was no God, the Church was the only voice shouting that we have an intrinsic value as people because we are the children – the true children – of God. In fact, for many of us in the diaspora during the years of communism in Armenia, we saw the leadership of the church, particularly His Holiness Vazken I, as our father, as our parent. He personified the parenting aspect of the Church.

However for the last 30 years with the independence in Armenia, we feel a maturity, where we don’t need our parents, we don’t need their lessons and we don’t need to learn. We have become ungrateful to the parent that delivered us. Those of you who have children know that the most painful thing in life is to have your children go against you. When you know you have raised your children with love and they turn on you with indifference, it is the most painful of all feelings. And so you can imagine how our Church, which exercised the spirit of St. Joseph as our adoptive parent, feels. Nevertheless, as a true parent, we never give up hope.

Today, I stand before you to tell you that our Church is engaged in a battle to win the soul of our people. Our programs, particularly here within the Western Diocese, are here to elevate and educate our people to an understanding of themselves and their lives in this world today. We are here to teach, young and old about the rich Faith that we call Christianity. We teach, as St. Joseph did, that you never have to feel alone or abandoned. We value, as St. Joseph did, the importance and sanctity of the spiritual life – life in communion with God. We stand at an important juncture in the life of our people, where materialism has consumed us to the point that we have forgotten the true treasures that are valuable in our lives. Today our spending pattern at Costco and the type of hood ornament on our cars are the symbols of wealth, rather than the knowledge that we are joint heirs of Christ. Today, Sunday morning, the children of the first Christian nation are buying and selling merchandise at an outdoor bazaar (one of which which takes place on a street called Artsakh, in Glendale) forgoing the source of true wealth.

Like a good parent, we note these faults, to bring our focus back to the path that saves us. Our criticism is laced with hope because we love our children. Our programs and our teachings are produced with the courage to raise our children in that same love. I hope and pray that you will take advantage of this opportunity that is being delivered to you by our Diocese. There is never any shame (amot) in not knowing, only in not being willing to learn. Our Lord Jesus Christ came 2000 years ago and ushered in the Kingdom of God. One solitary life has changed the course of history. One life continues to be discussed and followed on the four corners of the globe. And His life, the life of the Son of Mary, the life of Jesus Christ, began with a commitment from a true man, who loved his wife so much, that he said yes to God and adopted his wife’s son. He adopted and raised the One who adopted the Cross and gave us eternity. Today, this is what we celebrate. 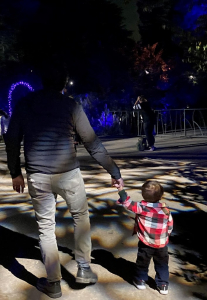