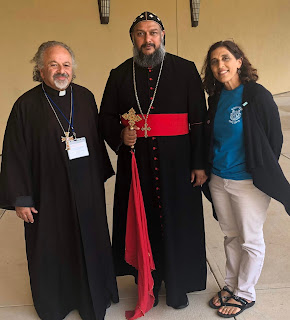 Finding Brothers and Sisters in the Poconos
“Abouna?” asked the voice on the phone.
“Yes,” I answered, not sure where this conversation was going but I knew any request that was followed with “Barekhmor” had to lead to something meaningful for our ministry. Barekhmor means “Bless, O Lord,” the same as the Armenian priestly greeting “Orhnya Der.” 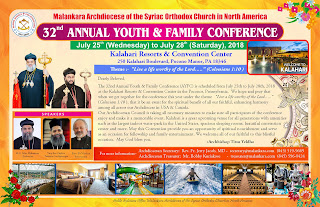 The voice identified himself as a priest of the Indian Orthodox Church, specifically from the Malankara Archdiocese of the Syrian Orthodox Church of North America. “We’ve seen your videos on the Internet and would like to invite you to address our youth at our annual conference.” Of course, “our” videos are “their” videos. The Malankara church is a member of the Oriental Orthodox group of churches and therefore a sister Church of ours. We share a common faith and enjoy communion in our Lord Jesus Christ. As expected, when two siblings find each other the conversation was warm and real. It was a dialogue which landed us in the Poconos Mountains last week for the 32ndAnnual Youth and Family Conference of the Archdiocese.

Seven hundred and fifty members of the church had travelled from throughout the country to the beauty of the Pennsylvania Mountains to share, worship and grow together with their Primate, His Eminence Mor Titus Yeldho, Archbishop and Patriarchal Vicar. Even more, young and old came together with their clergy for this special week held at the Kalahari Resorts and Convention Center. The excitement level was high. The event had sold-out only a month after reservations began being taken earlier this year!

Yn. Susan and I immediately felt the warmth and charm of this community on our arrival. We met with priests, we met with their families, and we met with the youth. The enthusiasm throughout the Convention Center was contagious. The days began and ended with prayer. I was the keynote speaker for the Youth and as such most of our time was spent with the younger generation both at prayer and classes. 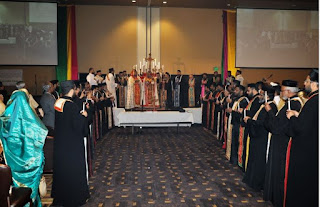 The clergy processed into the Convention Center where the Archbishop chanted the hymns of praise and officially started the gathering. As we processed the people greet the collection of clergy with soft songs and shining lights. I was overwhelmed with emotions when I first saw the name of the event on the posters decorating the Convention Center wall. The gathering was called “Youth and Family Conference.” It may seem like a small matter but in that small gesture of placing the youth ahead of all else, the church and its leadership, from archbishop to priests, lay-leaders to volunteers, was making a bold statement about their priorities: The youth are first and foremost.

The comparisons between both our communities – Armenian and Indian – are striking. Issues that we struggle with in the Armenian Church – such as culture and religion, language, assimilation, relevancy – are part of the common conversation. The Indian Orthodox Community, they told me, came to America in the 1970’s, about 70 years after the first Armenian communities were established here. Many of the challenges we encountered during the first few decades of our church’s life in the New World are the ones they feel today. In a very real sense, while speaking to many of the members of their church I felt as if I was looking at the church of our grandparents. We are here in America with new sets of rules and conforming to the societal pressures while trying to remain steadfast to the values and traditions that uniquely define us and give our lives meaning. While in this “time-travel” state I was hoping that reciprocally, in me they would have an opportunity to peer at the church of their grandchildren. There is a lot to learn from each other. While the Armenian Church has been here almost twice as long, ironically it still struggles with the hurdle of language – a hurdle which the Indian community has jumped and, as we witnessed, the youth participate at a very real level of engagement in the liturgies and prayer services.

The theme of the week was “Living a life worthy of the Lord” (Colossians 1:10).  I had a chance to present three different lectures/discussions, one on the concept of Lord-worthiness, another on the challenge of the Cross in the worthiness walk, while the last talk was intended to empower youth in activism.
In the 1990’s, while serving as the Parish Priest at the St. Andrew Armenian Church in Cupertino, I was approached by a group of Indian Orthodox asking if they could use our church sanctuary while their church was being built. With the permission of our Primate, they would come every Sunday following our service and worship in our sanctuary for about a year. When the church was completed, a high ranking cleric came from India to dedicated and consecrate the building. I was invited to the ceremony and took my place in a humble location, not to interfere with the proceedings. Suddenly I was asked to come forward and meet His Holiness. I was not expecting this honor and felt the anxiety of the moment. I greeted him and kissed his hand. He then did something which not only will I never forget, but it gave me a direction for my own ministry.
In front of the hundreds of parishioners gathered inside the new church, His Holiness took off his Pontifical ring, the ring of authority, and handed it to me. Puzzled, I looked at him for an explanation. He then asked me to read the inscription inside the ring. To my surprise, it was written in Armenian! It was gift given to him by the late Catholicos of All Armenians, His Holiness Vazken I, of blessed memory. He said he wore this ring given to him by his “brother-in-Christ” because it is a constant reminder of the plight of the Armenian people. He went on to explain to all of us by pointing to me and thereby to the Armenian Church saying that the Indian Orthodox had always enjoyed a place of respect in their country. “We have never known Christianity through suffering. The Armenians, on the other hand, have never known Christianity without suffering! We must be aware of their story.”
There it was. His Holiness’ words were given to the community to listen and learn, to me, they became an invitation to present the message of the Cross – the story of suffering and sacrifice – as witnessed by the Armenian people.

Those words became my motivation to bring the dimension of outreach and healing to my ministry. And here, a quarter of a century later, I had a chance to share the Gospel message, as it passed through the Armenian people and Armenian Church, to our brothers and sisters in Christ. Personally, this was a very humbling and spiritually rewarding experience.

The last evening of the Conference was a celebration and sharing of culture. We enjoyed dances, songs and cheer. The week came to an end with the celebration of the Divine Liturgy. We prayed, sang, worshipped and communed in the One Single Faith that unites us all: Our Lord Jesus Christ.
I passed along the greeting of our Primate His Eminence Archbishop Hovnan to the head of the Malankara Archdiocese, His Eminence Archbishop Titus and thank them both for this opportunity to share our Faith. During the Divine Liturgy Fr. Joel Jacob, one of the young priests who was part of the organizing committee, placed a priestly stole around my neck so that I may participate in the Celebration. Following the service, as I folded the holy vestment to return it, he said it was mine to use whenever I attended a Malankara Orthodox service. It was a gesture which reflected the warmth and hospitality we enjoyed with our brothers and sisters.
-Fr. Vazken Movsesian
To learn more about the Malankara Orthodox follow these links
http://malankara.com
http://malankara.tv
Program

Empire through Wyoming
Scroll to top