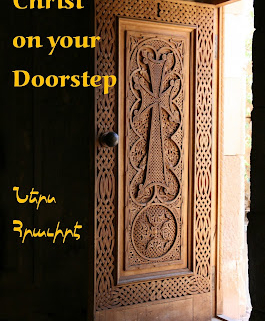 Christ on your Doorstep*
The Last Station-Stop
by Father Vazken Movsesian
The Resurrection of Christ is the defining moment in human history. It separates time into B.C. and A.D. Is it any wonder that for us in the Church, the Resurrection is much more than a celebration on Easter Sunday? We come today with a new publication: “Christ on your Doorstep,” which is founded on the news of Jesus Christ’s Resurrection and is distributed to you beyond the Easter celebration.
Recently, in a conversation with our Primate Archbishop Hovnan Derderian, we discussed the ever-alarming growth of violence in the world around us and the despair it breeds. He pointed to a verse from one of the Dalai Lama’s books, “Just as a healthy immune system and healthy constitutions protect your body against potentially hazardous viruses and bacteria, mental immunity creates a healthy disposition of the mind, so that it will be less susceptible to negative thoughts and feelings.”  Can we, in fact, build up our mental immunities to transform the negative to the positive? Does such a wonder-drug or vaccination exist? And if so, where can we find it and in large enough quantities? 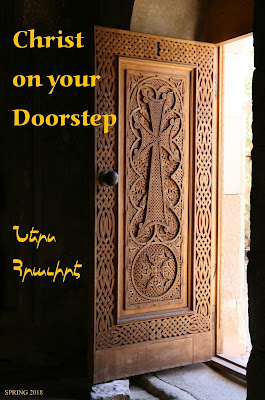 Today we struggle with many issues of identity. Along with the eternal questions of Who am I? What is my purpose? Where am I going? we add additional questions sparked by our ethnic make-up as Armenian Americans: What does it mean that I am Armenian? What is my obligation, if any, to my past? What does an Armenian Christian identity mean in a pluralistic and globalized society?
The Armenian American community finds itself in a rather precarious position. We are all thankful for the welcome and the freedoms we are granted here in the United States. A quick look at the last 100 years will show a mass exodus of the Armenian people from our historic lands. Armenians were scattered throughout the world with some strong-hold positions in the Middle East. In the last half century, we witnessed civil war in Lebanon, the end to the Shah’s regime and the rise of Islamic fundamentalism in Iran, the collapse of the Soviet Union along with the political ramifications it produced, the intolerance of Christian minorities in Egypt, two wars in Iraq and now, the gassing of civilian populations in Syria and the largest refugee crisis the world has ever seen.
Whether your family arrived to America in the 1920s, the 70’s, 80’s, 90’s or in the 21st century, you have made it to the last station-stop. Welcome: We are all Armenian-Americans!
Today, we all stand here with a sense of gratitude but also insensitive to the values and important institutions that have been forgotten. Our mental and spiritual immunities are weakened. We have forgotten the lessons of history. Is it a surprise that we find dysfunction in our families or that we run after the wealth that cannot possibly sustain us in the long-run?
During the mid-20th Century, during a time of global crisis, the Rev. Dr. Martin Luther King Jr. spoke the prophetic words, “We must all learn to live as brothers or we will die as fools.” The message can be adapted to us as the Armenians living in the Diaspora. We are all brothers and sisters and our only hope is to understand the unique and precious tie that exists between us.
At the Diocesan “Reclaim” conference this winter we heard many speakers talk about the potential we hold within us for great lives. We focused on the power of the Spirit which moves us to new realms of possibilities, both for our lives and for our communities. As we delved deeper into the subject from speaker to speaker, from discussion to discussion, we heard one theme reoccur: We haven’t lost the answer, we have merely forgotten about it.
Jesus uses the metaphor, “Suppose a woman has ten silver coins and loses one. Doesn’t she light a lamp, sweep the house and search carefully until she finds it?”
Fortunately, we have not lost our bearings, but we have misplaced them and need to search them out. In finding them, they are more valuable than silver coins for they are the life-giving vaccine, the shield of immunity against disease, loss and despair. Search no further than the Armenian Church. As the Body of Christ, the Armenian Apostolic Church is the living witness to Jesus Christ and His Resurrection. Political parties, philanthropic organizations, schools and other institutions all have their place, but it is only the Armenian Church that can provide the language and the tools for survival and growth. The Church has nurtured us for the last two millennia on a steady diet of Resurrection in our lives.
The power of the Resurrection builds our immunities – mental, physical and spiritual – and is fortified every Sunday morning in our churches.  The proof of this statement – the endorsement for the vaccination – is no further than the story of your family’s arrival to America. Despite the odds, despite the countless difficulties and problems, despite wars, torture and even Genocide, you have opened your eyes at the last station-stop.
Collectively, the proofs are even greater. This May we celebrate the 100th anniversary of the First Armenian Republic. Exactly three years after the beginning of the darkest page in human-history, three years after the Golgotha of the Armenian people, we proclaimed the power of resurrection over crucifixion. Sardarabad stands as a living monument to this power. Even more the Cathedral of Holy Etchmiadzin, with its bells ringing and clergy singing, are the silent heroes of freedom because they provided the language for resurrection.
America is the great equalizer – we are all Armenian-Americans at this junction. We all come into the mix with our own sensitivities and strengths. The Armenian Church stands at this station-stop with open arms for us to embrace the one message – the eternal message of resurrection over crucifixion, the victory of life over death. Celebrate the resurrection in all that you do. Turn to the Armenian Church – and find, not what has been lost, but what has been forgotten. Build up your spiritual immunities with the prayers and the hymns that point to resurrection and the possibility for true life.

May Flowers Not Enough
Scroll to top