We see the numbers here and there, at football games, on the bottom of soft-drink cups, on keychains, on graffiti and bumper stickers: John 3:16. It is so well known in pop culture that just the numbers “3:16” are enough to trigger a response, and act as a suffix on names of people, places and groups. Some call John 3:16 the Gospel in brief. “For God so loved the world that He gave His only begotten Son.” Indeed, it summarizes the purpose and intent of the Gospel, but thank God, we’ve been given so much more.

During the annual cycle of the Armenian Church, there is only one day on which this passage is read as the Gospel selection of the Divine Liturgy. It falls on this, the third Sunday after Theophany.

The Gospel of John, as you will remember, presented a Nativity narrative different from the traditional narratives that include the virgin birth, visits from angels, the manger, stars, kings, the inn, and the sort. St. John connects us to the very beginning of time. Today we find the other side time continuum, namely the connection to eternity. Listen attentively to the words of our Lord Jesus Christ:

He who believes in Him is not condemned; but he who does not believe is condemned already, because he has not believed in the name of the only begotten Son of God. And this is the condemnation, that the light has come into the world, and men loved darkness rather than light, because their deeds were evil. For everyone practicing evil hates the light and does not come to the light, lest his deeds should be exposed. But he who does the truth comes to the light, that his deeds may be clearly seen, that they have been done in God.” (John 3:13-21)

This passage is, in fact, the continuation of the Nativity narrative offered to us by St. John. The message here is timeless. It applies to all times. During the next couple of days we will explore these words in depth. For today, let us pray the prayer of the 16th hour by St. Nersess Shnorhali, “O my God, who opens Your hand and fills all things living with Your bounty, to You I commit my soul. Do care for me and provide for the needs of my body and soul forever. Amen.

Privilege of the Cross 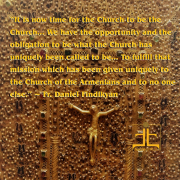 Solstice Bells Ring For the Light

Correcting the P-Correctness of “Jesus” 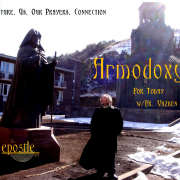