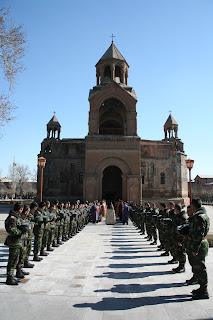 
Yesterday we were introduced to the story of the Prodigal Son. In the 15th chapter of the Gospel of St. Luke, Jesus offers this parable which touches so many different dimensions of our lives.
Yesterday we reflected on the sin of the Prodigal son; that is, the “prodigalness” of the young man. His sin was that he abused the gifts that were given him. We share in that sin by abusing, which includes not using, the talents given to us by God.
Today we look at the character of the father. The first thing we learn about him is that he gives completely, without restriction or condition. His younger son says, “Give me my inheritance so I can go out and establish and begin my life.” The father, being a wise man, certainly understands that the son may lose or squander the money, but does not argue with his child. There are times in our lives when we need to let go. Even though we may know better than our children, their life is theirs. Yes, making mistakes can be painful, but it is in those mistakes that children learn. This father understand this rule and lets go of his son. As difficult as it is, he allows his son – the one that he loves – to leave. He allows his son to establish his own life.
The second time we see the father is when the son returns. Remember the son is remorseful, or at the very least he understands that he can have a better life by returning to his father’s house. No matter what the son’s intentions may be, the father seeing the son return goes out to meet him on the road and does not even allow his son to ask forgiveness. He does not play a game of pride. He does not foolishly say, “Let me wait and see what he has to say.” He is there to accept his son. He does not say, “I told you so. I knew you would be back.”  Instead he recognizes his loved one – the son that he cared for, gave birth to and nurtured – had now returned! How excited he must have been. Of course he came running up to his son and embraced him.
Now there are two dimensions to this. Let’s follow each of them. First, the father in the parable is an expression of our Heavenly Father. God in heaven waits for us to come home and when we do turn back, He does not wait for us to beg to return to His Kingdom. His patience lasts for us to make that first turn-around. It’s then that He approaches us, embracing and grabbing us, He takes us in, giving us Life! That’s what this father did and that’s what our Heavenly Father does.
God accepts us as true children of his Kingdom. His acceptance of us is a given. The requirement is for us to say, “Yes, I have sinned. I have gone the wrong way. I have squandered what God has given me. I want to find the peace. I want to find that love that God has created me in.” God waits for us to say, “I’m ready.” The rest takes place – it actually falls into place.
Second, the father’s actions what is required of us in our relationships, not necessarily with children, but with one another. There are people who have hurt us. The degrees of hurt are not consequential. Perhaps we have cried over a misspoken word, or we have been devastated by betrayal. The hurt has left a chasm in our relationships with others. We have all created divisions between ourselves and God by virtue of our actions or inaction,  yet God has given us a way back. We too must do the same and leave doors open for those people to return back to us. In other words, an end to grudges is in order. Don’t get caught up in foolish pride. Leave doors open without expecting someone to walk through. Don’t wait for those who have hurt you to return, just know that deep down there are many desires that may not be understood. If the door is open, they may return and when they do you will embrace them.
Know that the heart is speaking to you. Do not think with your mind. Be ready to take in. Be ready to embrace, to hug, to suffocate them with the love that is in your heart. This is the example that Jesus gives us through the character of the father. It’s a double-edged sword, isn’t it? On the one hand it is showing us what our Heavenly Father does, and the example for us to do likewise those in our lives.On the other hand we have prayed, “Forgive us our trespasses as we forgive those who have trespassed against us.” God forgives us. We, therefore, have to be forgiving of others.

Finally, the third time we see the father in this story is when he talks to the older brother. He comforts him and he reminds him that we are all equal. In the sight of God it does not matter if you come back today, or if you come back in a hundred years. It does not matter if you came back yesterday. What is important is for each us to turn back to God. And that is the caring Father that we have in heaven, who does not prejudice his decisions by who we are, where we are, or what we’ve done. What matters is the “right now”. Are we willing to be at one, in harmony with Him, with the love and the universe that he has given us.