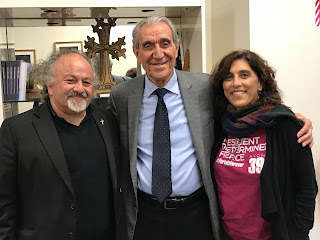 I wasn’t expecting this meeting. He introduced himself to me as Maestro Khoren. Could it be him? I thought. No. He was from long ago – a contemporary of Lusine Zakarian. He was at Holy Etchmiadzin when I was there in the 1970’s. The Maestro Khoren is the renowned and noted conductor of the Etchmiadzin Choir who has written one of the melodies and arrangements of the Divine Liturgies for the Armenian Church. If this was the Khoren of the Khorenian Badarak, what was he doing at the dining table at St. Nersess in Armonk, New York?
“He teaches us music and Armenian liturgical singing,” answered one of the students. Maestro extended his hand in introduction to me and said he was looking forward to celebrating the Liturgy together this coming Sunday at the Cathedral. I was still thinking: Could it be him? “Ah! You sound like you are a baritone,” said the Maestro to me as he walked out the door. “We will be able to sing in the higher keys.” I wish I understood how a low-note baritone gave permission to higher keys, but for that moment I gave a courtesy node and smile as he left the room.
“How often do you take classes with him,” I asked one of the seminarians. “Once a week. The rest of the week the Maestro is at the Cathedral.” It has to be him, I thought. Of course! That’s him.
An hour later we took a tour of the seminary. The seminarians were eager to show us around. I was anxious to check out my hunch. He was on break, between class sessions. He was challenging one of the students with a question about Aravod Looso: Which verse of the 36 verses (corresponding to each of the 36 letters of the Armenian alphabet) does not follow the rhythmic rhyme of repeating the first character (and therefore the phonetic sound)? I got into the act. I had not done my brain teaser for the day; it was a challenge I wasn’t going to pass up.*
Established: This is theMaestro Khoren. I’ve had a burning question that I’m sure he will be able to answer. I’ve kept this mp3 file in my Drop Box for just such an occasion. It is Zarouhi Vartian, singing Marmin Derounagan during my ordination Badarak. It is a unique melody which I have only heard sung in a few churches, including at my first parish in Cupertino. I play it for Maestro. He admits he’s never heard it but starts playing some chords on the 1990’s Yamaha keyboard in front of him. We’ve been invited to his classroom. He explains that the chord progressions suggest, what Komitas called “The Urbanized Armenian hymns.” Armenian hymns are sung and expressed by the villagers, who intertwine the spirit of the land and air into our prayers, he clarifies. Today, everyone wants to get out of church. They would not tolerate such a long and drawn out hymn. “Do you know how I came about to write the music for the Badarak?”
This is it!  We’re sitting one-on-one with the man who wrote one of three (Yegmalian, Komitasian, Khorenian) authorized melodies for our Divine Liturgy. And now, in front of this keyboard, we’re about to hear the story of how our Church took on a new form. Yes! It happened, not in the 21st century, but forty years earlier.
He shared his story. He begins by admitting, “I’m not a composer. I direct choirs. I’m a choral leader.” And from this humble admission he tells the story of what may seem like an accident of events, but in fact, as we found out, is how the Divine works through our lives.

Khoren Mekanejian was the choir director at the Mother Cathedral of Holy Etchmiadzin. Among his many singers was Lusine Zakarian, the “nightingale” of the Armenian Church, if not, of Armenia. The Catholicos of the time is the venerable Vazken I, who has a front row seat at every Badarak celebrated at Etchmiadzin. One Sunday, the Catholicos calls Maestro into his office following the Liturgy. He has a criticism of the way “Miayn Sourp” is sung. Lusine is accenting the first syllable of Mi~ayn and this conjures negative imagery. “Mi” = do not! “Mi nusdir” = do not sit! “Mi khosir” = do not talk! The Catholicos didn’t want the negative wording of “Mi” to be accented. He told Khoren to please instruct Lusine to accent the second syllable, draw out the second syllable, Miayn~.

After Badarak, in the mashutka that takes the singers back to Yerevan, Maestro tells his star singer to please accent the second syllable. She agrees.
The next Sunday, during Badarak, once again, Lusine accents the Mi in the Miayn. Vehapar hears the obvious. After church he summons Khoren into his office. “Didn’t you tell her?” “Yes I did Vehapar Der.” What happened? He sends a deacon to summon Lusine to his office. She arrives and admits that Khoren had told her but she did not comply. With a smile on his face Khoren tells us that at that point “I was relieved. The fault was off of me.”
The following Sunday, the same thing happens: Lusine accents the Mi instead of the Ayn. Now Vehapar is truly upset. So much so that he did not come to church the following Sunday. This cannot happen, thinks Khoren. So he writes the music for Miayn Sourp, with the notation to cut the duration of the Mi and make up for it by extending the duration of ayn. He hands it to Lusine and they practice. Come Sunday morning she sings Miayn Sourp to the specification the Maestro had written. Vehapar is pleased and thanks the Maestro.
Now he says that there are variations of the Miayn (=only/along/unique), particularly as it is sung in Amen Hayr Sourp, Vorti Sourp, Hoki Sourp. Maestro contemplates the expression of the Trinity in the Armenian Church as Three Persons in One Nature. His challenge is to present three persons – Father, Son and Holy Spirit – as unique expressions and yet united in One Nature. He composes the music for the hymn and it flies! Vehapar loves it.
So now Vehapar asks for Der Voghormia. He wants a new expression appealing for the Lord’s Mercy. The Maestro has had enough. “I’m not a composer,” he protests. “I’m a choir leader.” But Vehapar wants to hear a new Der Voghormia.
Khoren lives by Dzidzernagabert. He prayed. The flames, the smoke, the air gave him the melody. He plays a few bars for us on the keyboard. We are moved to tears.

He took the music to Lusine’s house and played it for her on the piano. She sang and they worked together to perfect the harmonies. His head was hurting from the stressful demand of this project. He asked her to make him some coffee. She went to the kitchen and continued singing while he played the piano from inside. Minutes later she brought him his coffee. She had mistakenly mixed salt in it instead of sugar! The demand to produce this hymn was just as stressful for her.
The Khorenian Der Voghormia was being sung at the Sunday Badarak on a regular basis. Catholicos Vazken was drawn to tears every time he heard it. Once a group of nuns from Rome had come to Armenia and visited the Holy See. When they heard the Der Voghormia in the Mother Cathedral of Etchmiadzin they were all wiping away tears. Vehapar called Khoren to his side and pointed to the sisters saying, “Do you see, it’s not only me who feels this way about your rendition.”
Now Vehapar upped the ante; he wanted the entire Badarak written by Khoren. This was going over the top! How could I write a Badarak or even dare to be in the league with Yegmalian and Komitas? Khoren once again extended his humility in a request to Vehapar to abandon this project. And once again, the venerable Vazken I, in a display of his wisdom argued back, “The Catholics have 20, 30 maybe even 40 different renditions of the Divine Liturgy. Is it too much to ask for a third for us?”

“Your Holiness,” Khoren continued his protest, “There is Aram Khatchadourian. There is Babajanian. They are all composers. I’m a choir leader!” To which Vehapar answered, “Yes, but they have not breathed in the khung (incense) of our Armenian Church. The Church is in your system.”
The Khorenian Badarak was written. It was celebrated once a month in Etchmiadzin and in several churches throughout Armenia. He admits that that was the case only because Catholicos Vazken insisted upon it with his bishops, many of whom had expressed opposition to something new being introduced into the church. Today, it is regularly celebrated at the St. Gregory Cathedral in Yerevan and in other churches as requested.
It was a memorable moment we shared with Maestro, a reminder that new tunes, new harmonies and new melodies are all possible. Of course, for me, the musical expressions are a metaphor for things even greater. But this afternoon, our tears have choked us up to be in his presence and hear his story.
*Answer to Maestro’s challenge: The stanza that begins with the “vo” letter, since it is connected with the ‘vieun” and therefore makes the sound of “oo” in one of the verses.
https://epostle.net/wp-content/uploads/2018/09/IMG_1264.jpg 240 320 Vazken Movsesian https://epostle.net/wp-content/uploads/2022/07/final_logo_large_for_epostle_web-300x189.png Vazken Movsesian2018-09-11 02:22:002022-09-21 01:15:50Meeting Khoren of Khorenian
0 replies

911 Findings in NY
Scroll to top