This week of the Advent Journey is dedicated to what theologians refer to as, “The Problem of Evil.” Simply put, it’s the incongruity of believing in a good God, who is all powerful and being faced with the reality that evil exists in the world. In other words, given that evil is real with headliners such as cancer, war, molestations, earthquakes, and famine, either God is not all good or God is not all powerful. Why would a good God, who is all powerful, allow evil to exist?

Evil is a problem which has perplexed people since the first-time villagers had to pick up after a devastating earthquake or a lightning bolt created a forest fire that wreaked havoc for people and all the members of the animal kingdom. In this day and age, when we understand that earthquakes are caused by the shifting of  tectonic plates, and lightning bolts are the result of charged clouds grounding, God doesn’t need to enter the equation. However, for theologians and clergy who make a case for a good and omnipotent God, forming an answer is called a theodicy. It follows that if God allows these evil, then is it possible that evil is a punishment from God? People of good faith, can easily reach this conclusion, and figure illness or death are paybacks from God for wrongs you have committed. And so, the question was brought to Jesus.

On this Sunday of Advent the Church offers the Gospel reading from Luke chapter 13. Here, there were two incidents that people perceived to be delivered as punishments from God. The stories – one of Galileans whose blood Pilate had mixed with their sacrifices and the other was of a tower which fell in Siloam causing the death of 18 people – were the focus of this inquiry of Jesus. On today’s scale, it would be like us asking Jesus if the Indonesians who died in last month’s earthquake perished because they were sinners? Or was it because of the sins of the Ukrainians that bombs fell on their cities?

In the passage, Jesus answers, Do you think that they were worse sinners than all the other because they suffered this way? I tell you, no! But unless you repent, you too will all perish.

Under no uncertain terms, Jesus gives the definitive answer that evil is not the punishment of God upon us! The idea that God sits in heaven waiting for us to make a wrong move so he can blast us with a lightning bolt is as absurd as it sounds. And Jesus emphatically gives us a big N-O!

So then, why evil? Can’t God vaporize all evil? Or is it that he just doesn’t want to? We will pick up with these questions tomorrow, on our journey through Advent.

We pray Shnorhali’s 15th hour: Christ, guardian of all, let your right hand protect and shelter me by day and by night, while at home and while away, while asleep and while away that I may never fall into sin. Amen.

In the parable of the “Prodigal Son” (Luke 15), when the wayward boy is reconciled with his father, the servants of the house hear the voice of the father command, “Bring out the best robe and put it on him, and put a ring on his hand and sandals on his feet.” In this action, the son would be reconciled completely with his father.

The recovery granted to us by God is complete and full. By looking inward, we discover our weaknesses and count our strengths. The delicate balance between the two is defined by our perception, attitude, and our ability to communicate with God.

Begin with prayer, “Christ, you are the growing fire, inflame my soul with the fire of your love, which you have shed on the earth, that it may consume the stains of my soul, clear my conscience, purify my body from sin, and kindle in my heart the light of your knowledge. Amen.” (Shnorhali #10)

Armodoxy has developed in a land and among a people that have not known peace for long stretches of time. Armenia, at the intersection of three continents, Africa, Europe and Asia, has been trampled on by invaders, barbarians and would-be conquerors.

Sunday after Sunday in the Armenian Church, there is a “question-and-answer” session which takes place during the Divine Liturgy. This Q&A has been going on for centuries. The deacon, with the chalice in hands, approaches the priest and asks that the doors be opened for the “King of glory.” The priest asks, “Who is this King of glory? The Lord strong and mighty, the Lord mighty in battle?” The questioning continues and upon his second inquiry, the deacon announces, “This is the King of glory!” and hands-off the chalice for the priest to prepare the Holy Eucharist.

It was the Psalmist who first framed the dialogue on behalf of a hurting world (Psalm 24:8-10). And it has been heard and overheard from altar areas ever since, during times of trouble, persecution and war.

Priest: Who is the King of glory… mighty in battle?

Wars are won and wars are lost but in the case of Armenia, the number losses far outnumber the wins, prompting a more appropriate question: Who is this King, so mighty in battle, that the war was lost? Perhaps not as an audible chants by the deacon, but definitely in the solitude of the mind. Ultimately, what does it mean to proclaim God as almighty – mighty in battle – in the face of horrific tragedies that we endure?

In Holy Scripture, time and time again, we find our Lord Jesus teaching by example. When a tragedy befalls another, he touches them with his love and asks us to do the same. During the Divine Liturgy, the deacon is heard inviting people to worship. He beckons the congregation to stand in peace, to pray fervently, to listen in awe, to prepare themselves and to approach the Blessed Sacrament. Simply put, he calls everyone to celebrate the victory of Christ. His pronouncement “He is the King of glory!” is a response to the priest’s question and at the same time it is an invitation for us to engage in the Kingdom which is in our midst.

“The King of glory mighty in battle,” is the answer the Deacon proclaims to the priest and in-turn to all of us, every Sunday. We are invited to explore, engage and discover the King of glory for ourselves, “mighty in battle” who is here answering us, our sufferings, our dilemmas, and our wars, by touching us with his love and compassion. By accepting the invitation, we engage in the Kingdom of God. We accept a call to personal and community responsibility to extend ourselves. Indeed, the Kingdom of God is within us!

The Q&A, the Divine Liturgy and hence, our Church is calling us to this higher understanding of our Christian Faith, as members of the Kingdom, to engage in the struggles and sufferings that are all around us, not with a question but with the solid answer: He is the King of glory, mighty in battle.

Today we pray from the Lords prayer, “Our Father, may your kingdom come, may Your will be done on earth as it is in heaven.” Amen.

For Jesus, there is one thing which is greater than God. It probably sounds unusual to express this, in this manner, but in fact, when all is said and done, Jesus makes it very clear that one thing is more important than God.

Jesus makes it clear that the sacredness of church, the worship practice, or even supporting your church are all secondary to our reconciliation with one another. He draws a line separating sincerity from hypocrisy, it doesn’t make sense to give outwardly if you aren’t at peace inwardly. “Leave your gift there before the altar,” he says. There is something much more important, and that is for us to be at peace with one another, reconciled and in union with one another. In fact, this is the first message given to us on the night of Jesus’ birth: “Peace on Earth/Good will toward one another.”

Christianity is about our reconciliation with one another and thereby being reconciled with God. 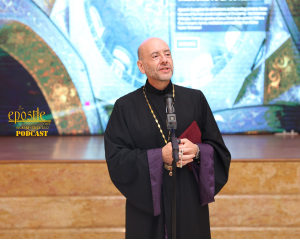 Next Step with Fr. Vazken #749: “We are sitting on a treasure” says Bishop Daniel Findikyan, and admits that the value of that treasure is “inconceivable.” Listen in on this interview that goes beyond administrative issues and talks about Faith, Christ, God, and our spiritual life. Discuss: Truth through Jesus, the Prosperity Gospel, Old and New Testaments and Bible in the light, the gender of God, translating beyond language, and much more.
Check out Epostle.net for the latest and daily updates.
Links
Bishop Daniel at St. Leon Cathedral (10/9/22)
The Next Step Interview with Bp. Daniel (2018)
Holy Spirit Building the Church
Cover Photo: Vahe Sargsyan at the 40th anniversary
Produced by Suzie Shatarevyan for Epostle.net
Subscribe and listen on demand on your favorite pod-catcher!
We’re on Stitcher, Pandora and Apple Podcasts.

Next Step with Fr. Vazken #730: Is it real or is it the metaverse? Perhaps both? The first step in the metaverse is the next step, as we prepare for the launch of Epostle.net and Web 3.0 experiences, Fr. Vazken takes this step and shares some thoughts along the path. Rotary phones, LSD, algorithms and creating worlds – controlling and resting some of the fears and apprehensions of the unknown. Tom Edison usurping the light from God? More…
Here comes the Metaverse, Are we Ready?
How the metaverse affects us
Captain Crunch and the AT&T hack
Rotary Phone & 17 year old
Joni Mitchell
Produced by Suzie Shatarevyan for InHisShoes.org and Epostle.net
Listen via Stitcher Radio on demand!
Listen on Apple Podcasts

Next Step with Fr. Vazken #739: A “star” shoots from one side of the sky to the other, from brightness to fizzle, at a speed that beckons slomo. A look at the speed of life, the expectations for tomorrow and reflections. Nurture vs. Nature, the case for goodness in people. Innocence lost. The greatness of children in the words of Jesus. The clergy prop. Imagination: the gift of God to exploit.
Epostle.net – https://epostle.net
Next Step #423 – A second listen
Matthew 18:1-14
Harry Chapin
Produced by Suzie Shatarevyan for InHisShoes.org
Listen via Stitcher Radio on demand!
Listen on Apple Podcasts

Next Step #685: Testing God: from a dialogue with the Pharisees to walking maskless, we try our best to stump Him. Matrimonial scriptures: another look at Matthew 19. Words matter: when the wrong words are used to baptize this priest, it affects every other sacrament administered to him and to those to whom he ministers.
Pope Francis restrictions on Latin Mass. Wine and forgiveness.
Invalid words for baptism invalidates priest
Our Weekly Bread – interview with Fr. Vazken
Highland Revolution – Gregjam
Produced by Suzie Shatarevyan for InHisShoes.org
Listen via Stitcher Radio on demand!
Listen on Apple Podcasts

Next Step #679: Finding authority in a post-God world. Defining boundaries and parameters for defining Christ, Christianity and real magic. A look at life after cancer, plus 10: Crutches, friendship and family. A humbling look at the ego. Wrapping up 13 years of podcasting: the virtual church.
Forty Days to Healing by Fr. Vazken
60 Minutes: UFOs regular sighting by military
WD168 this week
Parik Nazarian Cycle of Life and on Cycle of Life on Amazon
Cover: Sunset over Redwood Shores, Fr. Vazken 2021
Produced by Suzie Shatarevyan for InHisShoes.org
Listen via Stitcher Radio on demand!
Listen on Apple Podcasts