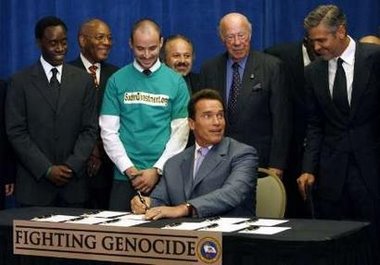 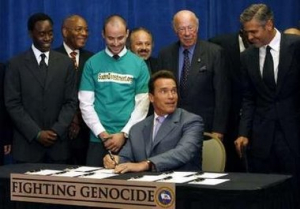 The first law, Assembly Bill 2941, will prohibit the state’s pension programs — the California Public Employees Retirement System and the State Teachers Retirement System — from making investments in corporations with business ties to Sudan.

“This is an action that says we do not cooperate with them in the horrors of Darfur,” he said. “We will not pay for it; we will not support it and we will not enable it.”

The second piece of legislation, Assembly Bill 2179, provides legal safeguards for the University of California against potential liability issues that could stem from state divestiture of funds from companies with interests in Sudan, he said. 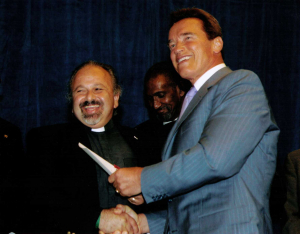 Joining Schwarzenegger for the bill-signing ceremony on Monday were former

n Tim Leslie and Paul Koretz, who wrote the bills. Also in attendance was Father Vazken Movsesian, a parish priest at St. Peter Armenian Church in Glendale and director of In His Shoes Ministries, wh

“It’s our way of saying that we’re walking in the shoes of the people of Darfur, just as we’ve gone through our own genocide,” Movsesian said. “It’s sending a loud, clear signal that genocide will not be tolerated in the modern world. The one weapon that we have is money. It costs money to run a genocide and by California — the world’s fifth-largest economy — divesting from Sudan, it’s sending a signal that if you continue it, you’re out of money. Without picking up any guns, without killing anybody, we’re making a difference.” 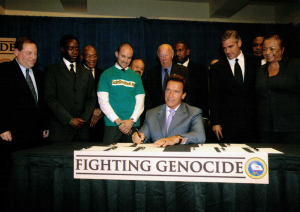 e, which began in 2003, has resulted in the death of hundreds of thousands of men, women and children and left millions homeless, Schwarzenegger said.

“No one is being spared, and even if the violence would stop today, the country would still have deep scars for many generations to come,” he said.

The governor also signed a bill on Monday that permits California residents affected by the Armenian Genocide to pursue legal challenges against financial institutions that withhold deposited or looted assets, extending the statute of limitations to Dec. 31, 2016.

Schwarzenegger has signed Armenian Genocide Commemoration bills every year since he took office in 2003. 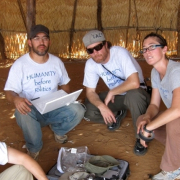 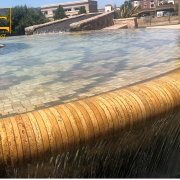 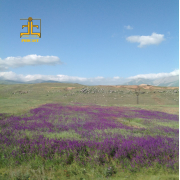 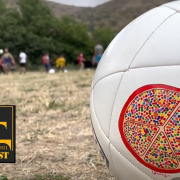 First Step in the Metaverse

Narrative of Relevance
Scroll to top