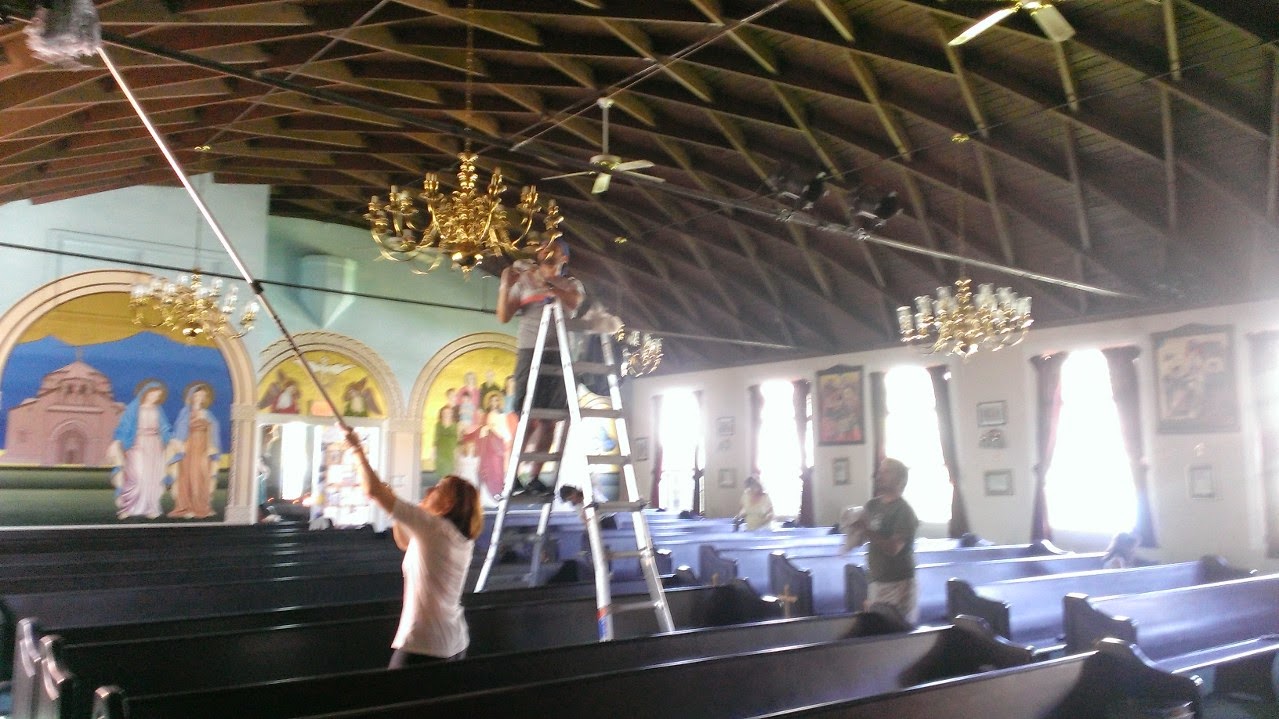 It was a very emotional morning – just to see everyone come out to clean and decorate our church for holy week. And then, when it came time to open the curtain – after the 40 day Lenten period – we prayed and read the Gospel reading for the day – John 11 – 12 (please read the entire chapter). What hit me hard was the passage where Mary anointed the Lord’s feet with perfume and then wiped them with her hair.

I don’t know what it was, but I was so moved – what an expression of Love! And Jesus (and now us) knowing it was in preparation for his death, he stood up to the defense of that holy moment. There we were in the church – scrubbing, wiping, cleaning – and now our curtain is open. I looked around – most of the people there probably don’t do so much for their own homes, but in this church – our home, Christ’s home – they were giving it their all.
It’s been an incredibly difficult and emotion-filled Lenten Season and know I’m looking forward to tomorrow’s Palm Sunday feast and the week that is ahead of us.

(John 11) Six days before the Passover Jesus came to Bethany, the home of Lazarus, whom he had raised from the dead. 2 There they gave a dinner for him. Martha served, and Lazarus was one of those at the table with him.3 Mary took a pound of costly perfume made of pure nard, anointed Jesus’ feet, and wiped them[a] with her hair. The house was filled with the fragrance of the perfume. 4 But Judas Iscariot, one of his disciples (the one who was about to betray him), said, 5 “Why was this perfume not sold for three hundred denarii[b] and the money given to the poor?” 6 (He said this not because he cared about the poor, but because he was a thief; he kept the common purse and used to steal what was put into it.) 7 Jesus said, “Leave her alone. She bought it[c] so that she might keep it for the day of my burial. 8 You always have the poor with you, but you do not always have me.”
When the great crowd of the Jews learned that he was there, they came not only because of Jesus but also to see Lazarus, whom he had raised from the dead. 10 So the chief priests planned to put Lazarus to death as well, 11 since it was on account of him that many of the Jews were deserting and were believing in Jesus.
https://epostle.net/wp-content/uploads/2015/03/WP_20150328_002.jpg 719 1279 Vazken Movsesian https://epostle.net/wp-content/uploads/2022/07/final_logo_large_for_epostle_web-300x189.png Vazken Movsesian2015-03-29 01:45:002022-09-21 01:20:07Preparing for Holy Week
0 replies