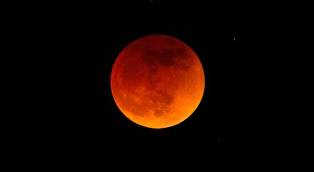 A full Lunar Eclipse takes place this morning and will be the last one until 2025. Enjoy…

From the earliest of times, from the most ancient history of the human race and even before, people have looked up to the heavens only to stand in awe of its vastness and beauty. It has been the inspiration poems, songs and prayers. For many, it has signaled the existence of the Creator, the Prime Mover, or simply, God.

One of the sacred scriptures in Armenian Orthodoxy is the Book of Ecclesiasticus or the Wisdom of Jesus Son of Sirach. It reads as a testament to the wonders of the heavens and as a prayer. Today, we offer this reading from the Scriptures:

I will now call to mind the works of the Lord,
and will declare what I have seen.
By the word of the Lord his works are made;
and all his creatures do his will.
The sun looks down on everything with its light,
and the work of the Lord is full of his glory.

The pride of the higher realms is the clear vault of the sky,
as glorious to behold as the sight of the heavens.
The sun, when it appears, proclaims as it rises
what a marvelous instrument it is, the work of the Most High.
At noon it parches the land,
and who can withstand its burning heat?

The glory of the stars is the beauty of heaven,
a glittering array in the heights of the Lord.

On the orders of the Holy One they stand in their appointed places;
they never relax in their watches.
We could say more but could never say enough;
let the final word be: ‘He is the all.’
Where can we find the strength to praise him?
For he is greater than all his works.
Awesome is the Lord and very great,
and marvelous is his power.
Glorify the Lord and exalt him as much as you can,
for he surpasses even that.
When you exalt him, summon all your strength,
and do not grow weary, for you cannot praise him enough.
(Sirach 42-43 NRSV)